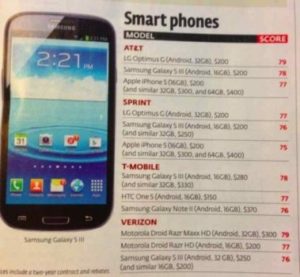 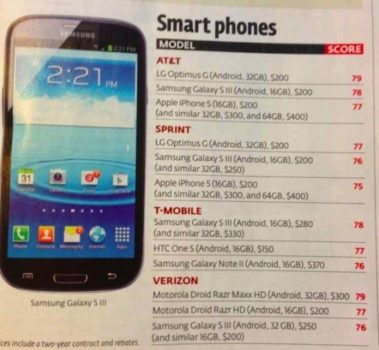 As you can see in this preview published by Business Insider , according to Consumer Reports , the iPhone is at last place in the ranking of smartphone offered by telephone companies in the United States, after Android smartphones like LG Optimus G and Samsung Galaxy S III.

Consumer Reports is an American magazine also present on the web, which for nearly 80 years provides its readers reviews and comparisons of consumer products and services, so much is taken into account in the United States. This magazine has compiled a list of the best smartphones for each telephone company (in the U.S. Most of these terminals is purchased with telephone subscriptions) and the iPhone 5 is exceeded by the rival Android.

As you can see from the image that will be published on the “Consumer Reports” of February, in the case of AT & T sees the ranking prevail, even if a few points,  G LG Optimus and Samsung Galaxy S III on the iPhone 5, which ranks only third. A similar situation in the case of the company Sprint, where the same terminals Android detach, of points 1 and 2, the top product of Apple.

T-Mobile does not yet offer the iPhone 5, so it is normal that does not appear for this operator, but surprisingly not take the stand in the case of Verizon, where the Motorola Droid Razr HD and its version Maxx HD cover the first two positions ahead of the Samsung Galazy S III.

It is not clear yet what are the metrics adopted by Consumer Reports, so at least for now be satisfied of the single classification.