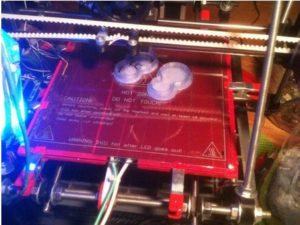 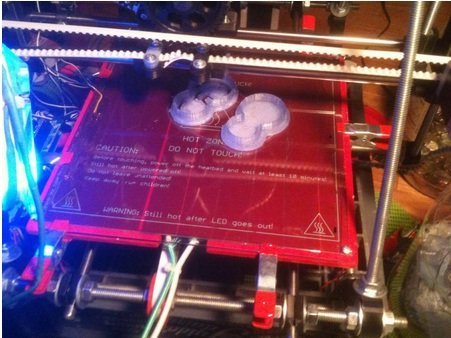 The survey was answered in full by 358 people of 280 are men and 24 women , with an average age of 35.5 years. Most respondents identified more with the community of “makers” than with “P2P production,” although some belong to hackerspaces and spaces of collective creation, most said that their activities take place outside.

The geographical location of participants and users of 3D printing technologies, focuses on a50.3 per cent in Europe , 37.7 in North America (U.S. and Canada) and 8.3 in Australia-Oceania, while Asia accounts for 1.7 percent , Latin America only 1.3 percent andAfrica 0.7 percent.

3D printing technologies are not new, however, for the last 5 years the use of 3D printers blew through the open-source development of new models. According to the survey there are users who used uan first 3D printer for 27 years , but in 2007 its use significantly increased probably because the first model of RepRap was released in that year. According to the chart, 2011 is the year in which consolidated the presence of 3D printers at the scene of personal fabrication. 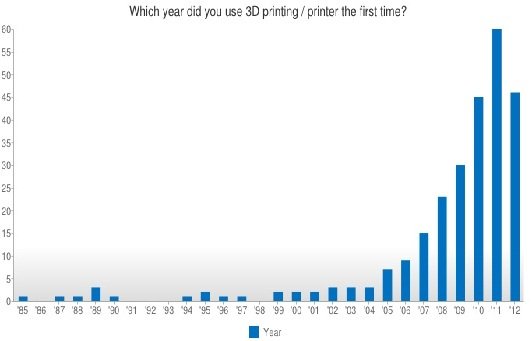 As for the hardware used, a little over 50 percent is concentrated in the RepRap , MakerBot is the second most popular model and the third is Objet. The rest is distributed among Ultimaker, Dimension, Eos, and Stratasys ZCorp among others. 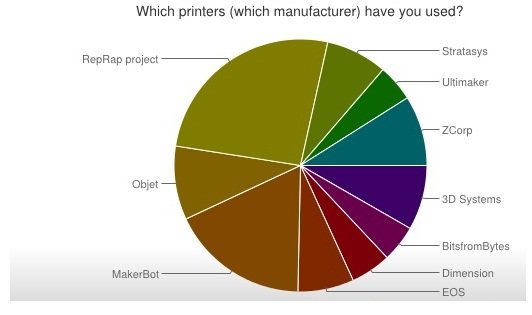 The most common uses are for printing everyday objects, art objects, parts for other devices (such as what would be the parts of RepRap), or for research and education.

Regarding the most popular printing services , the survey indicates that Shapeways and Ponoko are the most used, although according to the survey a large majority of users simply does not use third party services to tresdeimprimir. There is evidence that people who do digital manufacturing activities, not necessarily make it professionally, so that the most frequent users of services are only those who need high quality manufacturing and materials such as offering these services. (Metal, ceramic, wax) 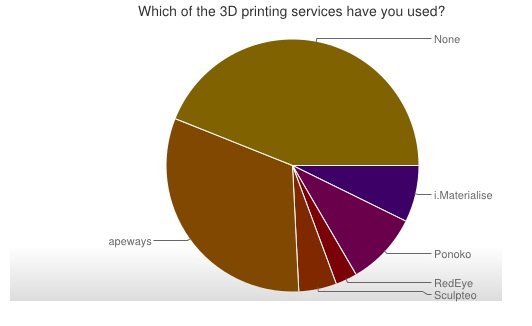 One of the reasons why personal fabrication and technology to execute have spread so quickly is the open-source. According to the survey 55 percent of those survey respondents participated in at least one such project.

To us this suggests that 3D printing can be seen in part as a continuation of open-source. Almost for half of the respondents had previous experience with the “modus operandi” of open-source and offer their knowledge to the printing community, explicit Membership RepRap community with open-source – the model used – is a result Obviously this connection.

The data also show that the 3D printer users seeking to improve the first quality printing, followed by speed, cheaper printing materials, the ability to print on metal and finally, printers cheaper.

As for the problems that currently exist for the advancement of personal 3D printing technologies include the use of plastic as the main material – you need durability and above all use sustainable raw materials – in its operation easier for people not only specialized knowledge to use printers, software modeling (CAD) more accessible and patents:

The protection of innovation through patents is seen as an obstacle by some participants. This type of intellectual property protection has negative effects on open-source development. One respondent raised this issue as “important patents under the power of some printing companies, open-source companies (3D printing) can not grow because of the risks, as happens Canonical or Red Hat in the software business.

It is not necessary to repeat again that patents are a way to attack the competition , and which will never benefit the majority but a few monopolies. Anyway.

The study concludes that the ecosystem of 3D printing is still very immature, mainly due to the lack of cooperation , specifically in the RepRap project, and which prevents there is good documentation and quality control. But also consider that the printing process is still very complicated. In this they have good reason. My personal experience with MakerBot is that to achieve quality printing is required to do too many tests and many (too many) settings in the preferences of Skeinforge that can become a nightmare and absorb all the time that could be spent on modeling and design objects. Once you pass this stage, everything is easier, but definitely getting there could be less complicated. The results and the experimental process itself are worth it, but usability has to be simplified so that further popularize this technology.

SSPP ended by announcing that the third industrial revolution is still a promise, but the current state of digital printing communities are a sign of its gestation process:

Clearly identified obstacles regarding the usability , quality items, price and coordinating collaboration preliminary talk about the obstacles on the road to revolution. Moreover, the variety of uses for 3D printing and rapid growth of the community shows great potential.

Yochai Benkler said a while ago that production P2P is a “socio-economic system of production that emerges from the digitally connected environment” and using shared resources and distributed decision making. If everything goes well, the third industrial revolution will depend on the common wealth, tangled and shared … or not.

3D Printers Will be in Space

How to Copy-Paste a Building