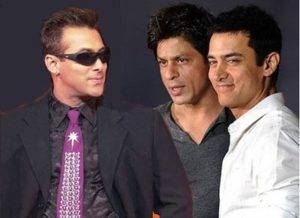 The end of the year has arrived and there are no big movies  are left to be released before the next year except  Don2 .  There are We have  some  Bollywood  movies of  big stars who will come again in 2012 with big bang.

First of all salman Khan who gave us supper hit movies this year we hope he will rock again next year because No one  can beat Salman Khan when he  comes to drive the fans crazy. With the movie of director Kabir Khan ‘Ek Tha Tiger‘  our macho man will return .After ‘Maine Pyaar Kyun Kiya’ and ‘Yuvraaj’  Aditya Chopra  who is the producer of  the movie bring  once again  most talked couple of Salman and Katrina together.If media reports are to be believed you can see another big movie of your favourit star ‘Sher Khan‘ or ‘Dabangg 2‘ .Sohail Khan’s production company may be bring  this movie next year.

Aamir Khan, Any list which is related to films will be  incomplete without this star . His upcoming  thriller ‘Talaash” will hit the theaters in the end of  next year and Kareena kapoor  will play the role as female lead.

King Khan  hit the theaters with his big budget movie  ‘RA.One’ this year. Although the film has earned alot of  money  but failed to earn  good reviews.Bbadshah of Bollywood will be back in the end of this year with Farhan Akhtar’s ‘Don 2‘ in December.  The previous Don was a supper hit and once again Khan is expecting to hit the jackpot again.

The charming hero has not announced any other film but he knows the value of a familiar face so it would not come as surprise if Shah Rukh Khan announces any film in near future.

Hrithik Roshan`s name has  entered into the list of superstars  although he is at least ten years junior to Khans . The actor is coming in 2012 with Karan Malhotra’s ‘Agneepath‘. This movie can be the first supper hit of 2012  because  the promos have created among the audiences a great enthusiasm.

An other movie of supper star will be ‘Krrish 2′ which has broken all records for satellite rights already. Before a single shot was captured on camera the film was sold in a handsome amount .

Akshay Kumar  is returning with full force to the silver screen after giving big flops  like ‘Thank You’ and ‘Tees Maar Khan’ this year. ‘Desi Boyz’ will be  just the beginning of Akshay  because  with high production values he has five  films which are lined up for release in the next year.

Sajid Khan’s ‘Housefull 2‘ in which Akshay and Asin will play  the lead roles  will be first to release  in next year.  The next will be Prabhu Deva’s ‘Rowdy Rathore‘. Akshay  as a action hero and  Sonakshi Sinha’s presence will be adding more charm in the film .

Milan Luthria`s the sequel of ‘Once Upon A Time In Mumbai‘ which will be the first movie of Akshaywhere he feature in a character which is based on a true story .

Shirish Kunder’s ‘Joker’ in which Sonakshi Sinha will again give company to Akshay  where the Delhi lad will seek help from aliens .

Ajay Devgn is coming in the start of the year with  ‘Tezz’  which will certainly give a good competition to  ‘Agneepath’ of Hrithik  and Ranbir Kapoor’s ‘Barfee’ because these films  will be  light up theatres in January 2012 and Rohit Shetty s`Ajay Devgn starer  ‘Bol Bachchan’  will be  relese later in the year.