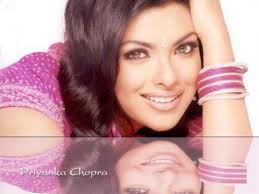 Priyanka Chopra became the most popular Bollywood star on Twitter. she may not have delivered any hit movie this year but it is sure that she has a considerable fan following across the globe which is  increasing day by day. Priyanka Chopra set a record In 2009, of having over 10,000 followers on Twitter in a month before her Mallika Sherawat was leading  with about  8,000 followers.

And now Priyanka became the most popular Bollywood star on Twitter this year again. She has as many as 1,456,840 followers on Twitter in which very big names are include like Sachin Tendulkar who is on second position with  1, 411, 593 followers and Amitabh Bachchan Standing in the third position with 1,258, 371 followers. Shah Rukh Khan  has 1, 193, 140 followers on twitter and Salman Khan  has 1, 081,282 followers and  they both followed Amitabh Bachchan.