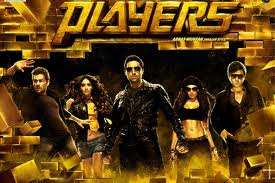 Players is a upcoming movie for the lovers of  Action and  thrill. This movie is  directed by duo, Abbas-Mustan. In this movie we will see in the lead roles Abhishek Bachchan, Sonam Kapoor, Neil Nitin Mukesh, Bipasha Basu, Bobby Deol, Omi Vaidya and Sikander Kher .

It is a remake of the  American film, The Italian Job,which was realesed in 2003 .The story of the movie is about a team of thieves who plan to steal gold  from a former associate who double crossed them.

The film began on November 9, 2010 as  its initial schedule was  and the filming will continue through India,Russia and  New Zealand . The movie “players” will hit the theters in 2012.