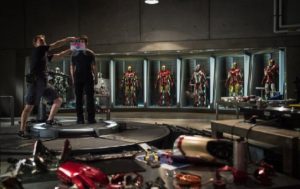 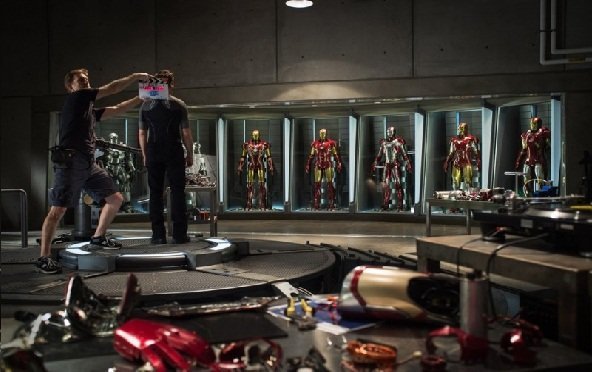 Do not know why I get that promotion of Iron Man 3 will be constant over the coming months, we will subdue all kinds of images and videos until the movie hits theaters on May 3, 2013 . So wait a year plagued the Marvel superhero. And why is that? Because filming has just begun and has already released the first official image of the same. In fact the film began shooting stage yesterday, June 4, and has appeared on the network the image of Robert Downey Jr. in his role as Tony Stark, or rather what was going to be because the picture is taken just before the director yells “Action”.

Anecdotes aside, what we can see is the increase experienced the number of suits of Iron Man during the two previous installments. You can guess the developments that have taken the character and will continue moving in this third installment. In addition to the image from the Marvel have also issued a corresponding press release with some data of the film, but is customary comoo all we can make of it is that all the superhero movies that have occurred have swept the box office.

Interestingly also have time to talk about the cast of this Iron Man 3. It listed several names that accompany Robert Downey Jr. against a new threat, which citedGwyneth Paltrow, Don Cheadle and Jon Favreau , who repeat of past shows.But do not talk at any time other names rumored to appear in the film, Ben Kingsley, Guy Pearce, Andy Lau, Rebecca Hall and James Badge Dale , especially the first two, whose roles can be assumed to be most important history.You may still not officially confirmed their participation in the ribbon so it is a matter of time to sign, but did not want to risk including them in the final distribution. Or you may simply want to feed the rumors about who will or not in the final tape.

What is clear, for now, is that film production has started and there will be no problem (economic course not) that Shane Black has written for the May next year.