Held briefings for the press,  Mr. Masaya Takeshige developer at NVIDIA made a commentary about technology (AA) of the latest anti-aliasing.

The contents of this technique include, but are not announced new ones, these techniques have been used in the latest game titles as will be described later. 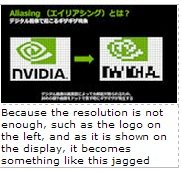 AA technology to reduce (jaggies) appear jagged when you are old technology, the display.

Curves and diagonal lines on the display, of the portion of the edge. Jaggy occurs, the resolution of the display is insufficient. In still images can not mind too much but when the screen moves in the game, in some cases appear as jagged wavy, causing great discomfort.

Typical examples of the AA technology, there is a (SSAA) supersampling AA. In SSAA, that is divided into a plurality of sub-pixels internally, a single pixel, average out the color sub-pixel, to reduce the jaggies.

For 4X SSAA, more specifically shading on four pixels is divided into two horizontal two vertically one pixel. (This varies depending on the algorithm) calculates the color of each pixel and the center point of the sub. Finally, the average value of four color sub-pixels, determines the color of the actual pixel color. Example will the picture below, the blue circle is the center point of the sub-pixel. Rendering the two colors (green and white) is present, the sub-pixels other than the lower right in this case only calculates the color of the center point. By it, one pixel has three sub-white, and the rest of the green, to average it, the original pixel is rendered in white color only diluted to one-quarter of the green. It looks simple but, for all the sub-pixel shading, the process will be heavy drawback. 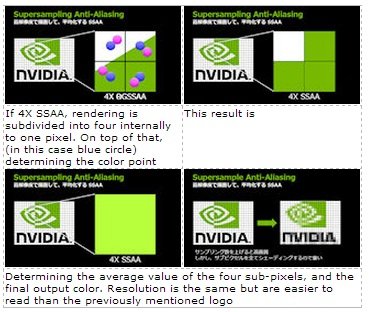 This did improve and I will be a multi-sample AA (MSAA). Same but even MSAA, is divided into sub-pixels to pixels, for each sub-pixel, depth testing. This extracts the color of the object in the reference point in the sub-pixel color averaging is performed, the final shading is performed. Pink circle and reference point of the sub-pixel’s an example of the picture below. Since the green and white, three one In this case, too, the original pixel color is diluted to one-quarter of the green white only. Since there is only once shading 1, MSAA, the load is less than SSAA, drawbacks remain on the mechanism, that there is no effect on the jagged texture. 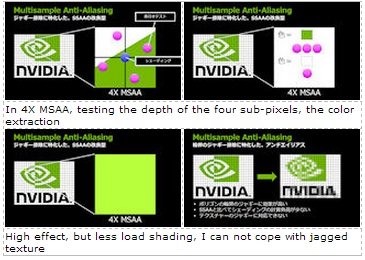 It was subsequently appeared FXAA. Division into sub-pixels are not performed in FXAA, render the usual. On top of that, to calculate the difference between the brightness of each pixel and the surrounding pixels to determine where a large difference in brightness is assumed to be an edge to detect the direction and length of the edge. Finally, just on the edge, It will do a blend of colors to match the surrounding pixels. If it cases the illustrations below, as represented in red line, pixel boundary portion of the green and white are determined edge pixels located on the edge thereon, the color with reference to surrounding pixels averaging is performed.

In the case of the picture below for the inside of the sighting device is represented in the texture, but its edges are still jagged in MSAA, you can see that has been eliminated in the FXAA. 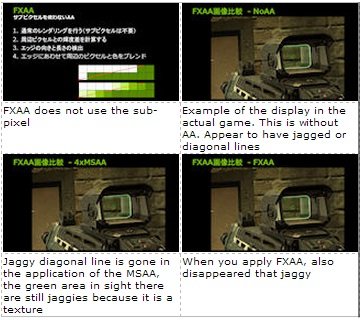 And, the image quality was achieved at low load is greater than MSAA, but it’s TXAA developed by NVIDIA.According to the description of NVIDIA, I have TXAA the load associated with split sub-pixels is the same as MSAA, more than 4x MSAA, and image quality in more than 8x MSAA at 4x TXAA TXAA of 2x.

Notable examples to obtain a higher quality than MSAA is TXAA, in MSAA, jaggy whereas occurs because the averaging process is performed on a pixel-by-pixel basis, and can be the difference in contrast to pixel boundaries, beyond the boundary pixels in TXAA for performing the averaging process with reference to a large extent have, AA acts effectively in the frame that is processed HDR. Another feature TXAA are those that further high image quality performed by referencing the results of the previous frame.

To take advantage of TXAA, but will need to be addressed in the game with GPU generation Kepler, was released on November 22, “Call of Duty: Black Ops II”, the Japanese PC version on November 26 been published, the latest title such as “Assassin’s Creed III” will be released is compatible with TXAA on December 21. Here are some photos and video in the actual game. 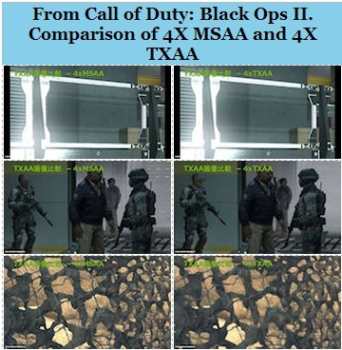 Now at a briefing, also announced the implementation of campaigns that are tailored to these latest titles. Presents a special backpack NVIDIA logo in-come, first-served basis to customers who have purchased the “Geared for Gaming PC” will be released from its partners from 26.