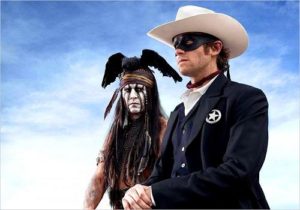 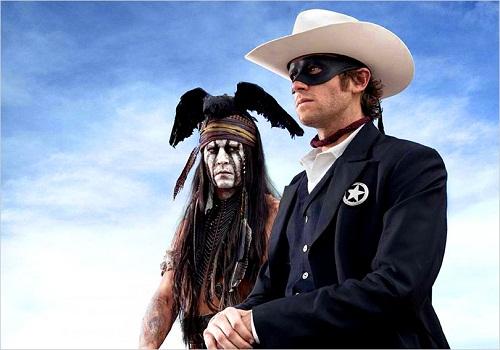 This is a project that always caught my attention. First because, despite the invaluable amount remakes of recent times and the success that once had the serial number of this American hero, it took quite a take on the big screen.Second, because it seems and even bears the title he wears, the view will focus on Tonto, the inseparable companion of the Ranger and besides, how could it be otherwise while the producers of The Pirates of the Caribean back withJerry Bruckheimer to head, will surely have enough touches of humor.

As we can see in the picture is not too much thought has gone into the look of your  Johnny Depp who closely resembles that of the Sparrow crazy saga of the pirates and I suspect will have enough of their tics. But as an old fan of the series and the cast that has the film, who include Helena Bonham Carter, William Fichtner, James Frain, Barry Pepper and Tom Wilkinson , I can only wait to show it will finally premiere on 31 May of 2013 after several roadblocks that shook the possibility of its realization.

The film has, on the other hand, the endorsement of Gore Verbinski in the address. The man knows how to deal with a Western, a genre that won him the Oscar this year to rank as best animation and who has described the film as

is a kind of Don Quixote told from the perspective of Sancho Panza.

As for the argument has been much talk of the subject and that the synopsis does not leave much in what will truly clear. Even had slipped rumors of supernatural beings in the story, like wolves or coyotes men with certain powers, which subsequently denied the producer while leaving open the possibility of certain foreign elements present in the story:

I do not know where they got the idea of werewolves. Never been on the sketches work. But there’s sort of overlap of foreboding and Native American legends and other things that are not fully understood.

It suggests that at least the synopsis of the film so far is what we all hope fairly according to the original story of the series, an Indian warrior recounts the untold story of a lawman who has become a vigilante and Thus a legend.Within this narrative epic promise surprises and humor constant struggle of two men from different cultures to live together as they fight against corruption.