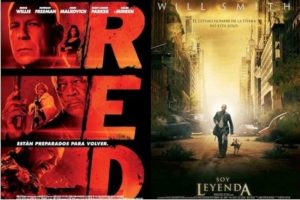 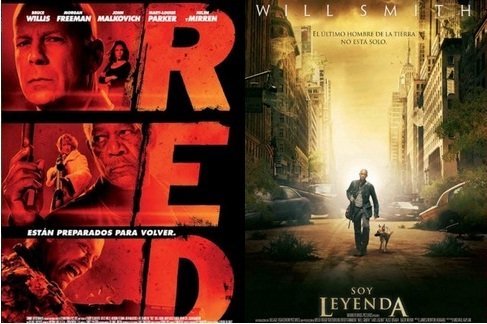 While the public demands new ideas in Hollywood are giving the green light to projects remakes and sequels. Last week it was confirmed to be launched ‘I Am Legend 2’ and ‘  ‘RED 2’ . Do you want ? Do any of  you? None?

Arash Amel has been hired by Warner Bros. to start writing the script for the sequel to ‘I Am Legend’(2007), a blockbuster that cost $ 150 million and grossed nearly 600 worldwide. Will Smith is listed as producer of this project (along with Akiva Goldsman ) and the intention of the study is to repeat his character, Robert Neville, although it had an ending … well, say … explosive. But nothing is impossible in American cinema. You may be given a role of “zombie” or appearing in flashbacks … We’ll see. Neither is known about the involvement of Francis Lawrence, but more likely to look for another director, younger and cheaper.

On the other hand, Dean Parisot shall be responsible for the staging of the second part of “RED” (2010), which was directed by Robert Schwentke, was made by 58 million dollars and got about 200 at the box office. The sequel is once again written by the writers Erich and Jon Hoeber , who apparently have had the back of the protagonists of the first part, Bruce Willis, Morgan Freeman, John Malkovich, Helen Mirren and Mary-Louise Parker . We will have to raise some too in this story. The premiere is scheduled for August 2, 2013 and is expected to begin shooting later this year after Willis finished shooting the fifth installment of ‘Die Hard’.

Will Smith, currently filming ‘After Earth’ with Shyamalan, has yet to premiere ‘Men in Black 3’ and in his future projects is ‘Hancock 2’.