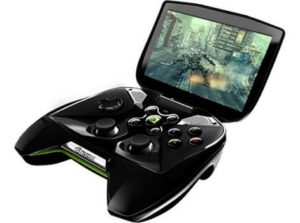 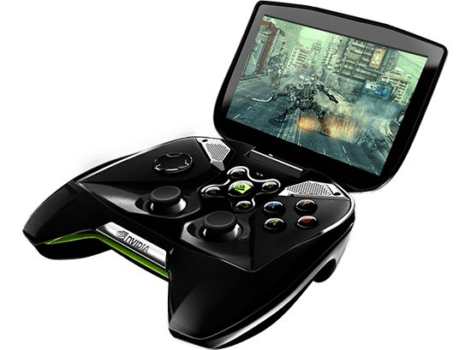 Nvidia at CES in Las Vegas introduced the Tegra 4 which is no big surprise. As CEO Jen-Hsun Huang on Sunday evening ( local time in Las Vegas ) announced a separate game console from the magic hat, the audience was amazed but then a bit.

Shield, which is the name of Nvidia folding handheld console, looks like an Xbox controller with mounted display. It uses the latest course Tegra incarnation with 72 graphic cores, four-A15 CPU cores and LTE modem. The operating system is Android 4.1 for use, according to Nvidia in a “vanilla” version, ie without the popular smartphone manufacturers in optical adjustments. The 38-Wh battery is in the game Operation 5 to 10 and in video mode by holding 24 hours.

The game is played not only on the built-in 5-inch touch screen with 720p resolution, but thanks to HDMI port on monitor, television or projector. According to Nvidia supports the HDMI port even 4K resolution. The graph can be calculated from the console – but they must not: Shield streams on demand games that run on a Windows PC on the TV. The console will then be used as a controller. Prerequisite for PC streaming is an Nvidia Kepler graphics card (from GeForce GTX 650). The console is in the second quarter of 2013 on the market, a price not yet called Nvidia.

The idea of a dedicated Nvidia gaming console fueled speculation about the anticipated successor to Microsoft Xbox 360 and Sony Playstation 3: The latter puts a technology developed by Nvidia GPU, while the Xbox on AMD (ATI) is technology.After AMD CEO Rory Read has repeatedly emphasized that his company wants to focus more on the OEM and embedded applications and orders for consoles eloquently silent, it is believed that AMD was able to score in both Microsoft and Sony, so Nvidia in the future will be without big-game consoles orders.