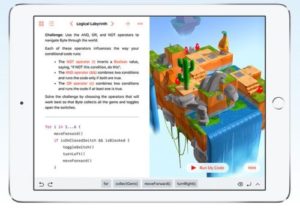 Apple always does something new and pleasing for tech fans; Swift Playground is one of these apps Apple released today. It is an iPad app that teaches kids how to code in its Swift programming language. Kids are interacted with and tasked with guiding a character called Byte in collecting gems. For playing this game, kids would have to essentially direct the character using Swift code.

Apple showed a demo at its WWDC keynote to introduce an iPad app Swift Playground which is decorated with bright colors and big photos designed to make coding easy for beginners and kids.

Kids would find Instructions on the left, and the interactive Playground on the right. Apple has made Coding quite simple just as dragging a command from the bottom — just like a QuickType keyboard but Swift code only — and then dropping it in the coding area on the left. 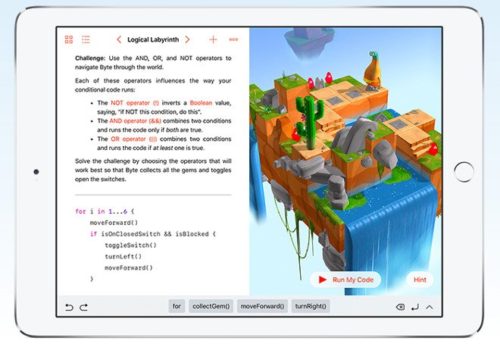 There is also an option for the children for selecting which lessons they seek to Learn to Code drop-down.

Apple has provided some exemplary ready-to-play lessons already coded for helping kids to get started. This becomes so exciting and interested as it teaches kids to do actual coding, and when they become more familiar and confident, they can do coding manually.

Swift Playgrounds is now available in the developer preview, and will be released for the App Store when iOS 10 ships in this fall.

1 thought on “Swift Playground: Apple Releases App That Teaches Kids How to Code”