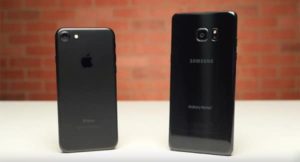 Are you looking for a brand new smartphone for your daily usage or for playing HD Games without any trouble; surely you would have a look into latest smartphone battery and would like to know about the speed of each smartphone before going to purchase it. No doubt, Apple‘s iPhone 7 or Samsung‘s Galaxy Note 7 would be at the top of  your list of choice. So here is iPhone 7 vs Samsung Galaxy Note 7 on ground speed test comparison to observe which one wins the race with a lot of margin. 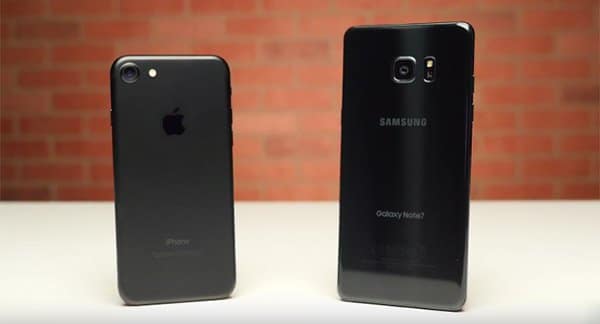 If you have already purchased Samsung Galaxy Note 7, then you are already bubbling in hot water because this smartphone can catch fire or explode during charging or usage as many world’s famous airlines have put a clear-cut ban on bringing this notorious phone to their planes. Moreover, you could feel more disturbance on knowing that Apple’s iPhone 7 also beats Samsung’s Galaxy Note 7 in on ground speed test too. It is shocking but it is true as you can watch the new video that shows Apple’s iPhone 7 is more speedy than Samsung’s Galaxy Note 7 when recently the both devices are compared for a speed test.

Regular smartphone users are already familiar with the process of speed test for any devices; it is not a difficult task to know which smart phone runs faster than other. Just note the time taken by the devices for opening up or for downloading from any app through relevant app stores. The first lap tests determines how faster the smartphone alives and runs an app from death mode, while the second lap tests the ability of a smartphone for  doing multitasking and memory management.

The most interesting technical part of this test is that Samsung’s Galaxy Note 7 with octa-core CPU and 4GB RAM gets an early lead due to its short animations in software. But then it almost goes into sleep-mode while its competitor iPhone 7 with 4-core CPU and 2GB RAM runs faster and loads the fourth app,the Asphalt 8 title by Gameloft, showing its speed and getting the lead by loading the title, content, and even exiting the app to the Home screen before the Galaxy Note 7 remains far behind even in running the initial splash screen.

Interestingly enough, even 2015 Apple’s iPhone 6S is found more speedy than the 2016 Galaxy Note 7 when both devices are put together in such type of real speed test. Now, with this latest video of on ground real-world speed test of two latest arrivals from Apple and Samsung, one can easily determine how powerful and speedy is the Apple’s 2016 iPhone 7 when it is compared with the Samsung’s 2016 Galaxy Note 7.

In a real-world environment,you can judge the time of loading and closing apps s shown in the video embedded below, but you will be shocked on observing there the time taken to load the Subway Surfers game on Galaxy Note 7. Thus this speed test outclasses Samsung Galaxy Note 7 as compared to Apple’s iPhone 7 in speed test and adds more fuel to the fire for firing Samsung’s Galaxy Note 7 already being criticized by tech gurus and smartphone users.  Now watch the video;